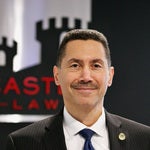 John Carter is a native of Chicago, Illinois and comes to Castle Law after a successful Law Enforcement career.
During his law enforcement tenure he served in a number of assignments including department legal counsel.
As legal counsel, John handled legal matters in a number of areas including Employment Law, Wiretap Law, and Administrative Law matters. John also served as an Army pilot and an infantry battalion commander during his military career.

John enjoys spending time with his family and is a lifelong Chicago Bears fanatic. He is also a U.S. Chess Federation rated chess player. He enjoys running and weightlifting as well.

Thank you for contacting us. We will get back to you shortly.

Please complete all required fields below.

5277 Trillium Blvd.
Hoffman Estates, IL 60192
Ph: 630-388-8253
The information you obtain at this site is not, nor is it intended to be, legal advice. You should consult an attorney for advice regarding your individual situation. We invite you to contact us and welcome your calls, letters and electronic mail. Contacting us does not create an attorney-client relationship. Please do not send any confidential information to us until such time as an attorney-client relationship has been established.
Contact Us Today