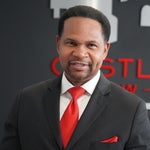 Mayor Richard Irvin was sworn-in as the 59th Mayor of Aurora in May of 2017 and is currently serving in his second term as leader of Illinois's second largest city. Before taking office as Mayor, Richard served as Alderman-At-Large of Aurora for 10 years. Richard was born and raised in low-income housing in Aurora and escaped poverty by joining the United States Army.  He is a proud Veteran of the U.S. Army, having served our country in combat in Saudi Arabia during the Gulf War.  Richard holds a B.A. from Robert Morris University and a Law Degree from Northern Illinois University. He has taught at both Robert Morris University and Northern Illinois University as an adjunct professor, and he went back to his original grade school as a substitute teacher in East Aurora School District 131. Richard Irvin is a former Prosecutor for Cook County State's Attorney's Office and Kane County State's Attorney's Office. Mayor Irvin has served as a Community Leader by participating on many boards, including the 708 Mental Health Inc. Executive Board, the Illinois Coalition for Community Services Executive Board, the Institute for Public Safety Partnerships as a Police Trainer and as a Big Brothers and Big Sisters Volunteer.  Before being elected Mayor of Aurora, Richard had a successful private practice law firm as a criminal trial attorney and real estate transaction attorney for over 15 years.  Richard Irvin is proud to join the illustrious Castle Law Firm team.

Thank you for contacting us. We will get back to you shortly.

Please complete all required fields below.

5277 Trillium Blvd.
Hoffman Estates, IL 60192
Ph: 630-388-8253
The information you obtain at this site is not, nor is it intended to be, legal advice. You should consult an attorney for advice regarding your individual situation. We invite you to contact us and welcome your calls, letters and electronic mail. Contacting us does not create an attorney-client relationship. Please do not send any confidential information to us until such time as an attorney-client relationship has been established.
Contact Us Today